The Lido. Outdoor swimming with style. 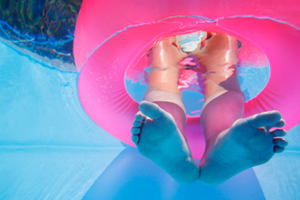 Stylish outdoor swimming pools known as lidos used to decorate Britain’s coastline and feature in some of her cities. Could they influence the design of your new pool?

From the mid-20’s on, 169 lidos were built in Britain. A few are still open and there are groups still working hard to restore and re-open a few of the others that remain.

For a time, in Britain’s seaside towns, the lido was more popular than the pier.

What was it about them that captured the imagination of the public?

Swimming first began to gain a popular following when Captain Webb swam the Channel in 1875. In 1926, Gertrude Ederle became the first woman to swim to France and within a few years, magazines were full of articles proclaiming swimming as a great way to improve health and general fitness for men and women alike.

By the end of the 20’s, swimming costumes had taken over from ‘bathing suits’, the cult of sunbathing had begun and there was a general fashion for ‘healthy outdoor pursuits’.

Holidaying abroad, however, was unheard of for anyone who wasn’t actually ‘rich and famous’ but it was probably these fashionable and wealthy few that brought the word ‘lido’ back to Britain from their summer tours. ‘Lido’ is an Italian word for beach.

Of course, these new swimming enthusiasts could simply bathe in the sea and change on the beach. But there were a number of issues with that.

Public morality frowned on getting changed in public and you could be fined for it in many boroughs. The sea is fine if you are an experienced swimmer but can be a little daunting for a novice. Without a changing room, what happens to your clothes, towel and picnic while you are in the sea?

And most importantly, how do you make money out of people swimming in the sea?

By the start of the 30’s it became as essential to have a lido, as it had been to have a pier forty years before for any seaside town that wanted to attract summer visitors in any number.

The biggest and the best.

Blackpool opened their new lido in 1923.

The pool was 116m by 53m; that is wider than a modern Olympic pool is long.

The Blackpool lido could accommodate 8,000 spectators and 1,500 bathers. There were changing facilities and refreshment bars; you could hire a costume, a towel and even a cap.

The architectural style, however, wasn’t what you might naturally think of as typical of a Lido. Classical architecture was still popular at the time and the Blackpool Lido featured hundreds of Greek and Roman columns.

In 1931 a lido was built at Hastings and St Leonards that was almost as big as the Blackpool pool but this time the building materials were reinforced concrete and the style was much more functional and modern.

By the mid 30’s a standard formula for lido design emerged.

Most pools were rectangular, decks for sunbathing and separate cafés for bathers and spectators were provided and the style was Art Deco with its clean lines and graphic shapes.

The most important of the lido’s buildings was pump room that kept the pool water clean. Most pools of the era had a cascade or fountain. The cascade often acted as a seating area where people could keep cool on hot days as they watched others swim. Water slides and diving boards were also key design features.

The Saltdean Lido just outside Brighton was – and still is – a fine example of this sort of design and architecture. A feature of Saltdean is the café that juts out over the pool like the bridge of an ocean liner. Curved glass and curved metal railings all add to the nautical feel.

Another outstanding lido that is still open is the Jubilee Pool in Penzance. Opened in 1935, the triangular pool nestles amongst the rugged rocks on this piece of Cornish shore. Streamlined walls protect the lido from storms and gales while the café is Cubist in design. Almost 60 years after it was built, the lido is still in excellent condition.

What can we take from the lido?

The lido embraced the concept of swimming and bathing for health and relaxation and wrapped it up in the very best technology and design of the time.

Where sites were ‘challenging’ such as the Jubilee Pool, they rose to those challenges and used them to create a unique and inspirational design.

The lido, for a short while, represented the peak of ‘lifestyle living’; a place which everyone wanted to see and be seen in. In fact, ‘the lido stands supreme, symbolising as it did, unashamed modernity, fashionable chic and healthy activity’.

We may not see the like of pools that can accommodate 1,500 people again, but the spirit of the lido, its celebration of health and grand design, surely lives on in the best of today’s private and public pools.

If you would like to add a comment to this article then please use the reply box below.

We hope this article has been of interest to you. There are many more articles on this site that will give you information on almost every aspect of your pool.