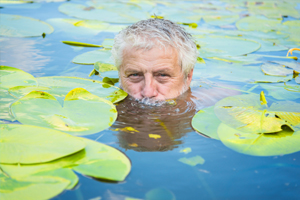 If you have your own swimming pool, you certainly love swimming but if you are wild about swimming you might take the plunge somewhere else.

For the majority of people swimming is an activity that is confined to the pool or the sea but not everyone feels that way.

Lakes, ponds and rivers have always been swam in but up until a few years ago they seemed to be the preserve of the rural eccentric or the Hollywood screenwriter.

Huckleberry Finn had his muddy swimming hole while ‘On Golden Pond’ showed the world how beautiful wild swimming could be but it was something that happened in a story rather than on a Saturday.

Now you can buy a map that will show you more than 200 wild swimming locations in the UK and there are societies for the thousands of people that swim there.

How did wild swimming become so popular?

In the water in the great outdoors.

There have been one or two mass, outdoor swims for many years now.

Since 1987, the ‘Loony Dook’ has celebrated Hogmanay in Scotland with hundreds of people taking the plunge into the River Forth. Ever since 1864, people have taken a swim in the Serpentine on Christmas Day.

The world has watched as these swimmers braved the cold and, in many cases, just wondered ‘why’?

But in 2006, Kate Rew, author of ‘Wild Swim’ founded the Outdoor Swimming Society, which now has over 4,000 members, and in 2007, wildswimming.co.uk came online with a Google community map map showing swimming sites across the UK. That map has had well over a million unique visitors and the Wild Swimming website is now full of information and advice for anyone who wants to participate.

Open-water swimming has become cool rather than cold and neither eccentric nor elitist.

Come on in, the water is lovely.

One thing that prepared the ground for the popularity of wild swimming is the successful effort that the UK made to clean up its rivers and waterways.

In 2011, David Walliams swam 140 miles of the Thames for charity, an impressive achievement but one that would have been seriously unsafe in the polluted waters of the 70’s or 80’s.

In 2010, Alice Roberts presented a TV documentary on open-water swimming, which re-introduced the idea to the broader public.

Of course, the Victorians and Edwardians were a nation of wild swimmers but they did not have the luxury of heated and treated swimming pools as an alternative. They also didn’t have to face local councils putting up ‘No Swimming’ signs just to cover themselves from litigation.

One thing to consider though is that you do sometimes need to be a hardy soul.

The average swimming pool is kept at a temperature between 28degC and 30degC but a wild swimmer will dive into water as cold as 5degC.

There is a lot to be said for open-water swimming.

But there is a lot to be said for a nice, warm pool as well.

We hope you have enjoyed this article and it has been of use to you.

There are many more articles on this site that will give you information on almost every aspect of your pool.

If you would like to add a comment to this article then please use the reply box below.